courtesy of google advanced images search
No need to tell me, I know how you think it is. This picture of a mama duck and her ducklings represent what we are supposed to see on the farm. Sometimes it is but I can assure you that everything is not always so bucolic. Sometimes it’s science at it’s mad chaotic best.

Recently we experienced something here at the Ranchito that has had me scratching my head. 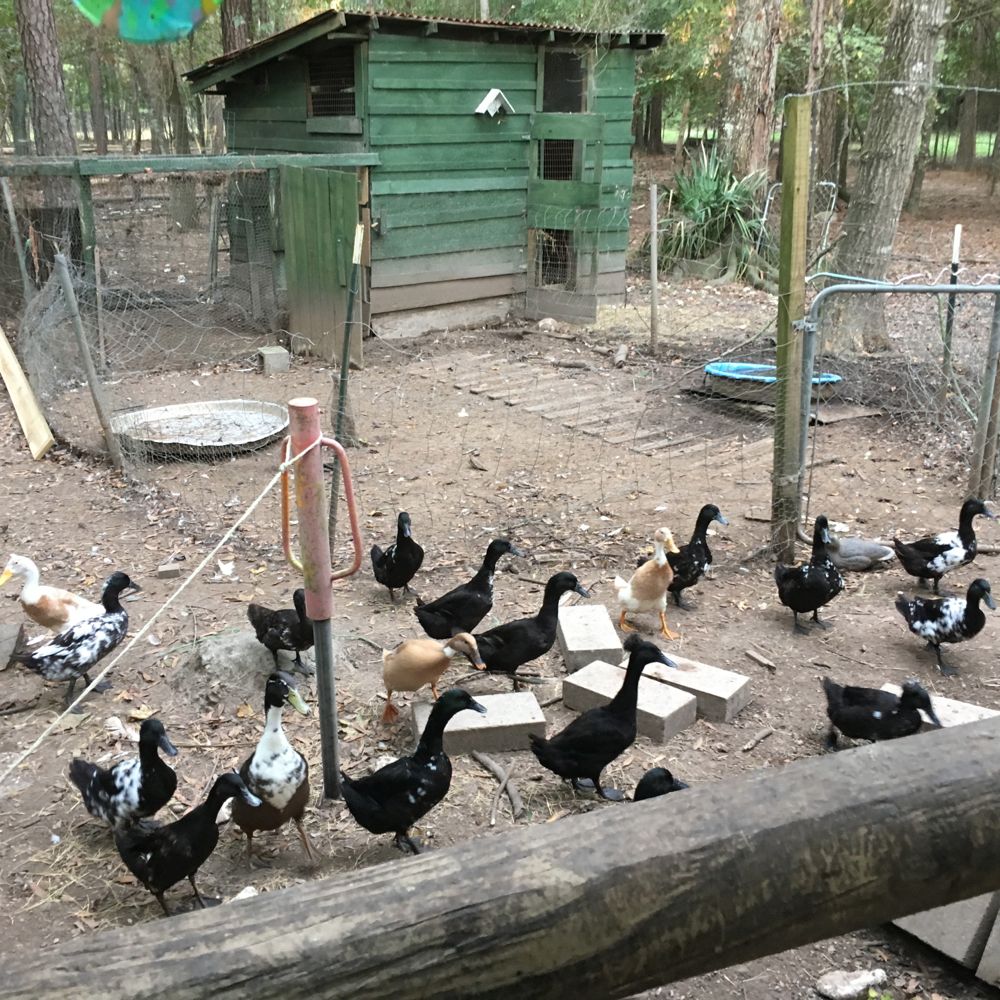 These black ducks are indian runners. Actually some of them are black and white but they were all black when they were ducklings. These ducks are incapable of flight and, in fact, we were told they will normally not climb a ramp to get into a chicken house.  I cut the door sill on this green chicken house so they could enter and exit.
Two of these ducks in the picture are a mix of mallard and runner. They were a gift from a friend when we needed chicks or ducklings to serve as companions for a duckling that hatched by itself. A duckling does not do well when it is all by itself.  There were actually three visiting caregivers and the third was dark with a beak that was pistachio green. One day he disappeared with about half of these runners and we can only hope that they survived. Nonflying birds do not do well (see dodo). The brown one in the center is probably the offspring of one of these hybrids and a muscovy. He/she grew to become the star of this little story. 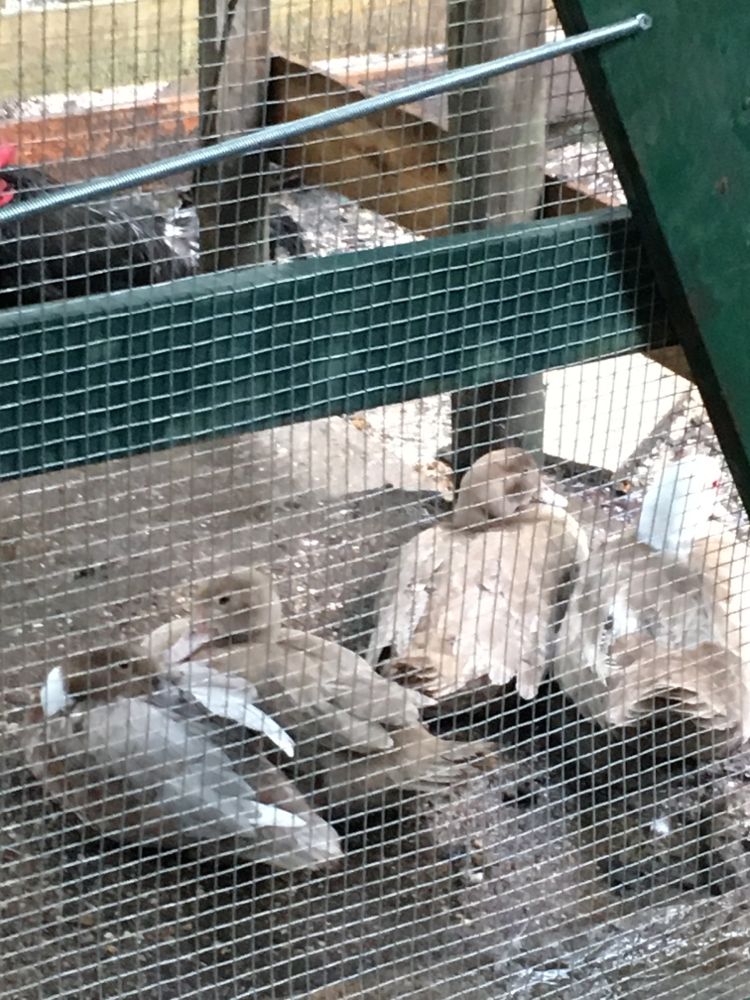 The duck at the right with the white head is the mama of the three ducks to her left. The two in the center we called the twins because we couldn’t tell them apart (still can’t). The one on the far left is our star again. 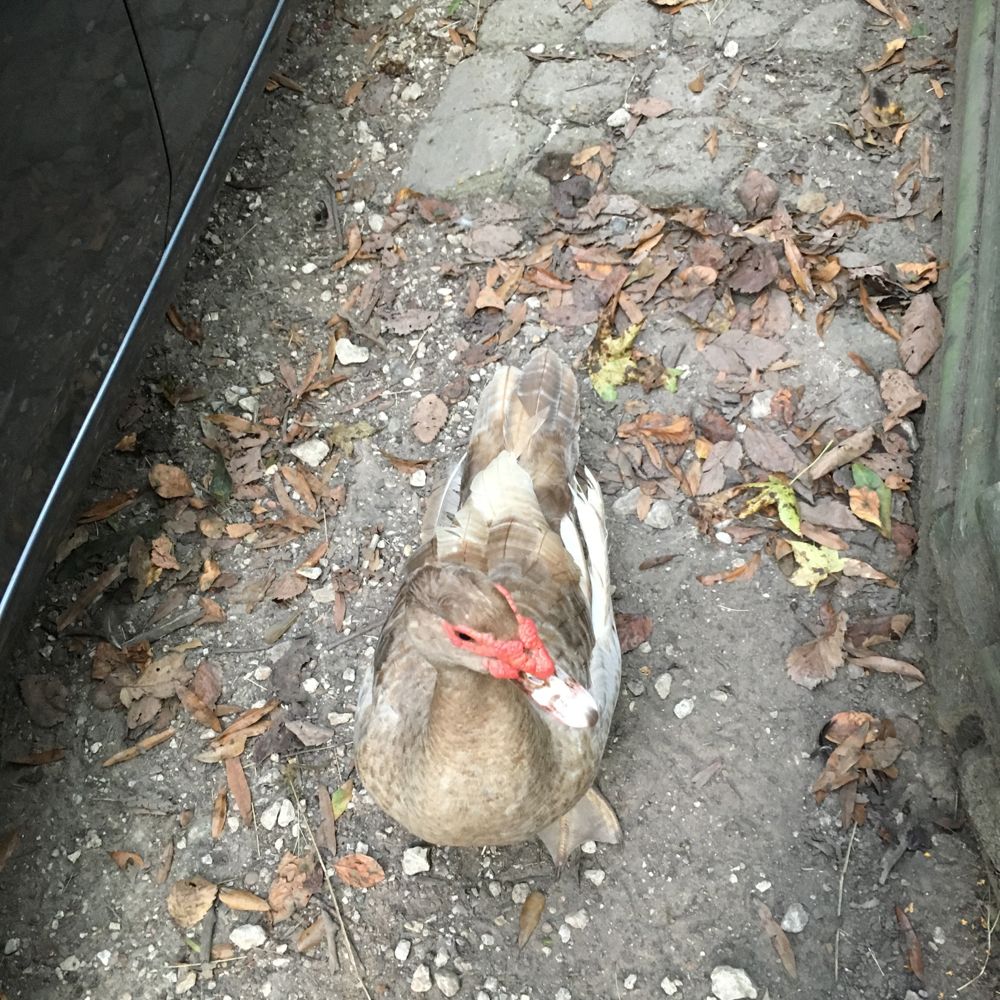 This is the mama from another angle. Muscovy ducks come in a variety of colors but they all come with the red mask on their face. This is called a caruncle and this is the size caruncle one would expect in a mature female.

We both felt that the little male was the prettiest duck on the place as he is a shiney sienna when the sun is out. We tagged him as a  male because he was bigger than his sisters. He could fly like his Muscovy mother but unlike the muscovy duck he quacks. Muscovy ducks hiss. He also had no caruncle covering his face.  We were unsure of his parentage. Also we know that if the hybrids have parents that are too different they are likely sterile.

Then this little mule duck began sitting on eggs. 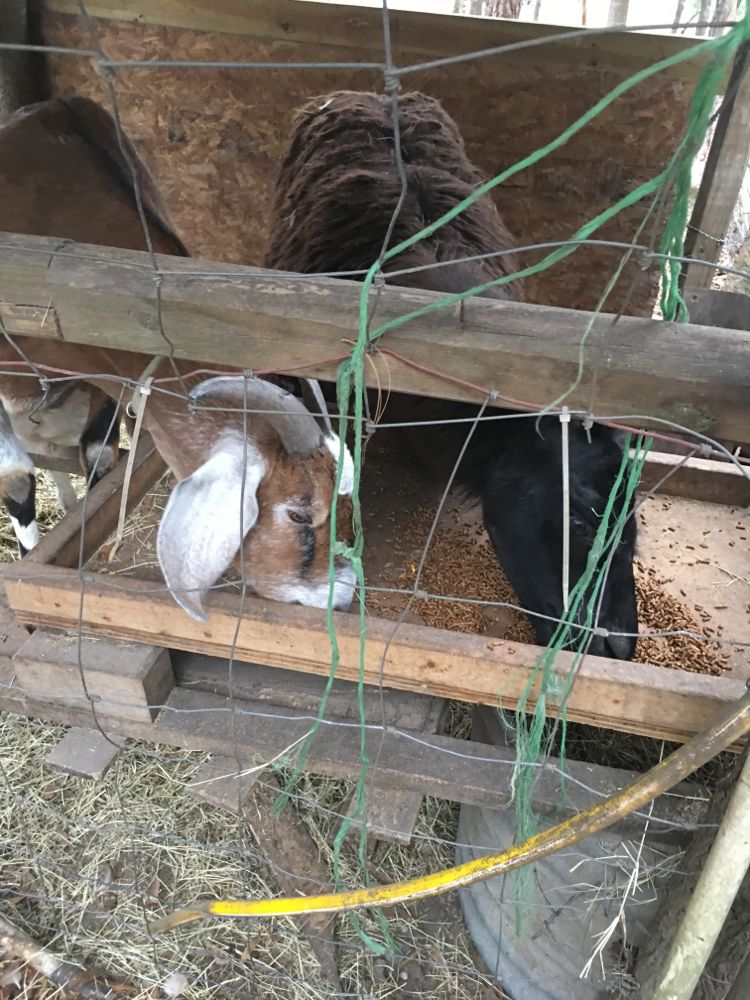 One day I went to feed the critters and she was sitting on eggs in the back of this little stall right up against the back well. First we were surprised that he had become a she and and we felt it was too early for he/she to be laying eggs. Then we were alarmed that she had laid the eggs where she did.

​I sometimes fed the goat and the llama hay in this spot although I have a hay feeder that we made for them that works better. The hay that you see spilled on the ground here is evidence of that but it is also the reason. The birds scratch through it and find bugs. Obviously, sometimes they make nests. This was one of those times. 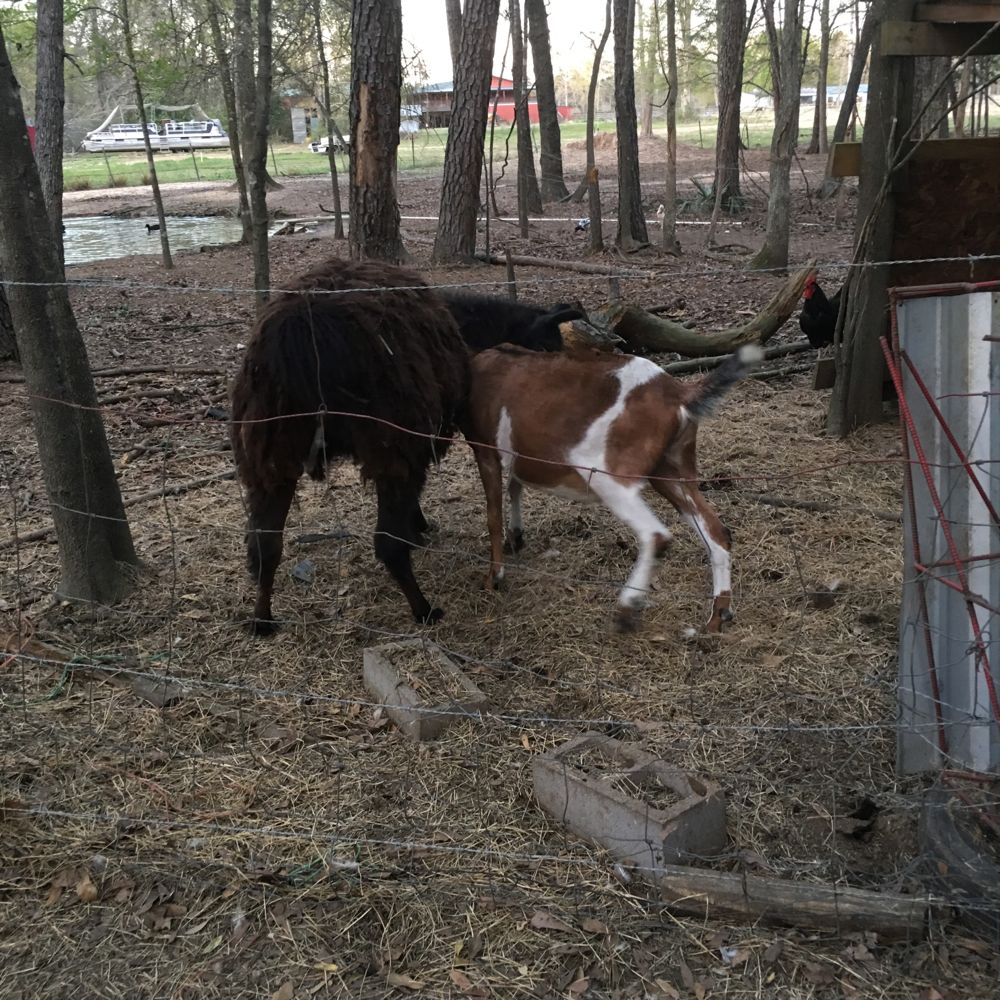 Here is another view of the back wall on the far right. In the center of the picture are two pretty unhappy roommates.  The llama it turns out, was trying to establish his dominance. This occurred as often inside the little shelter as outside. The duck appears to have known more about it than we did as all the eggs managed to survive till they hatched. They hatched earlier than a duck is supposed to and the result was fairly surprising. 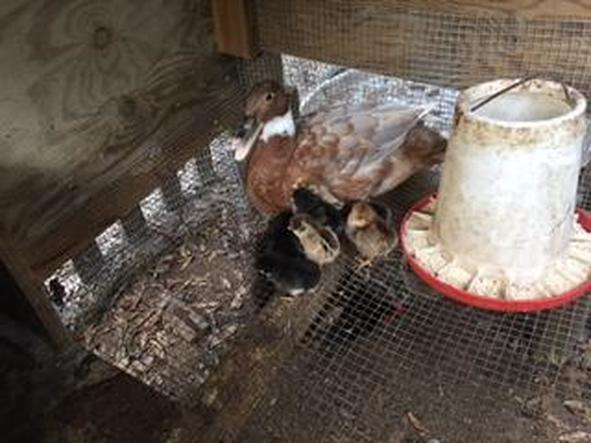 I went out early to feed the critters. The first thing I see is our little sienna mule duck with 7 little bundles of fluff following closely behind. I called Sally for assistance and she came running. We cage new arrivals for a couple good reasons. Hatchlings need to be separated from the flock to see that they get a share of the food and that they develop the needed immunities instead of being shotgunned with real world bacteria. 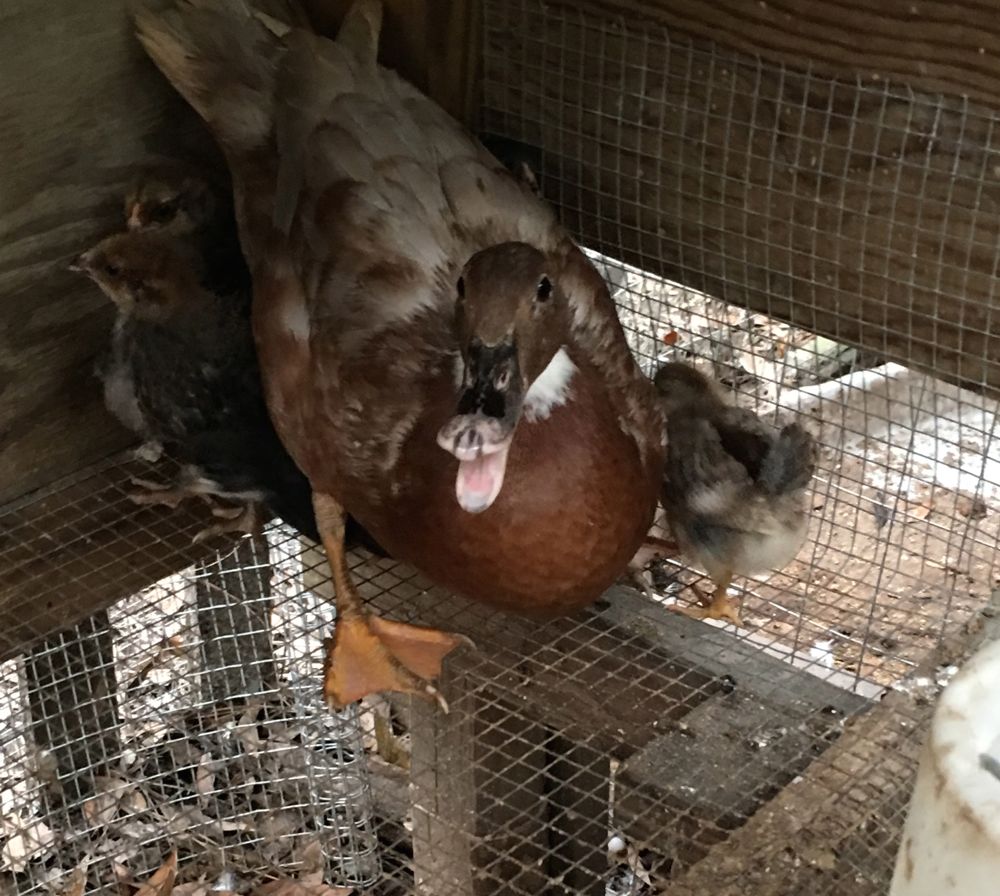 When Sally saw them she yelled out “Lee, they’re chicks”. Of course I had noticed the pointed beaks and the unwebbed feet. I figured anybody could see that and felt no need to explain. I knew she would spot it right away and you can probably see it yourself. Now she enjoys deluding herself by denying that I had immediately grasped the obvious. Now we had a third reason to separate them from the flock as a mama duck would be visiting the pond with this non-swimming troupe. I must say that the mama duck (as we now call her) was very protective and the babies had no better sense that to hide behind her. 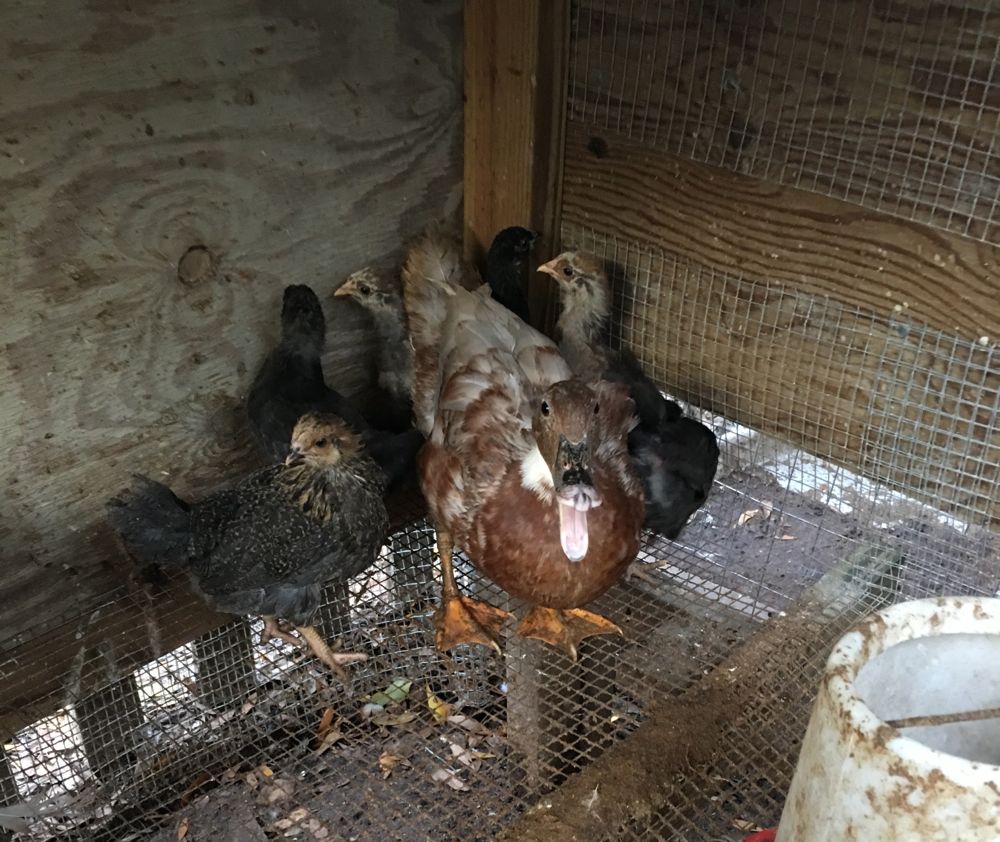 Sally has tried to explain this away by saying that the duck hijacked a chickens eggs. I think she is selling this situation far short. Science can be chaotic. She has presented the simplest of the possibilities but there could be far stranger things in play.  All I can tell you for sure is that if someone asks you: (which came first, the chicken or the egg?), a possible answer now is a duck. If things get any stranger, maybe even a dog. 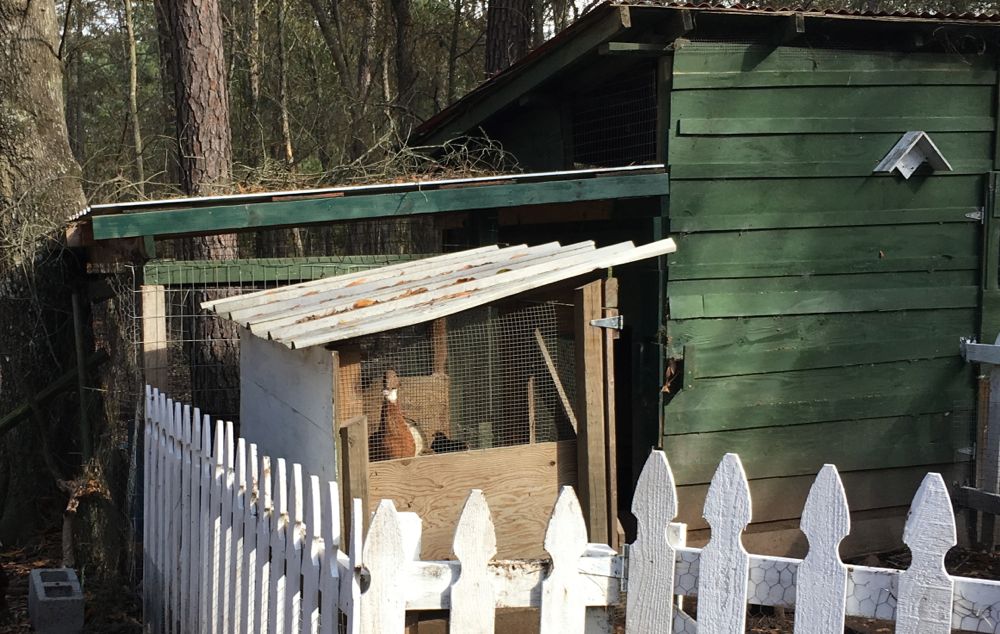 Ever vigilant. Mama is watching.