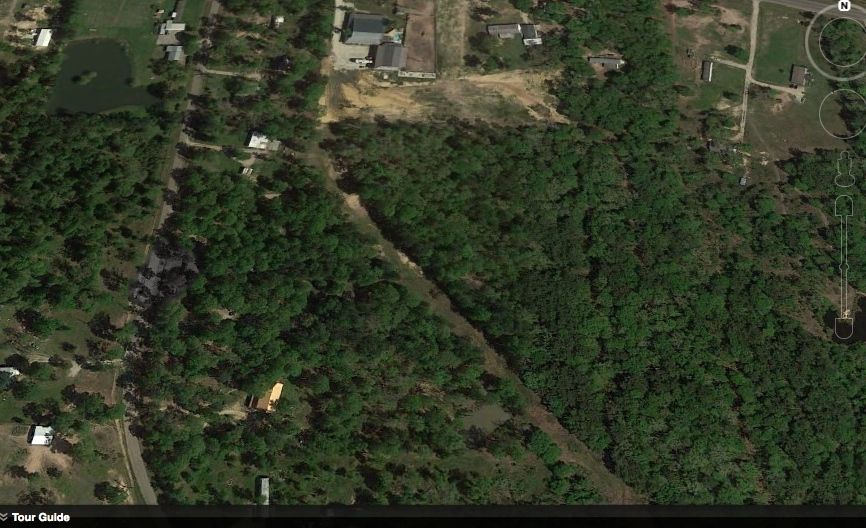 Google Earth view of my street. It is on the far left side of the picture. What looks like a road cutting vertically through the picture, and then jogging, is a natural gas pipeline that they keep clear of trees. On the right of the pipeline is Weyerhauser timber now owned by me and others.
I guess it's obvious that people who keep animals are never done with fencing.  This was a phase that took care of a longstanding effort to short myself on pasture.

When we moved here almost 20 years ago we moved into the center of three rectangles. Each rectangle was a plot of land containing almost five acres.  All three were habitable at the front but had uncut forest in the back half. As the center piece of property my borders were fairly flexible. Each of my neighbors had another neighbor on the other side and those property lines  were firm.

You can see the road that our properties are adjacent to running fairly vertically on the left side of the picture. My neighbor on the left (looking from the street) is the white building and long driveway bordered at the back by the patch of land that is scraped bare. The area scraped bare is her neighbor. You can almost see the road for the back border. It is the vertical line from the back of the scalped area.

The home that is visible about where the road jogs is the neighbor of my neighbor on the right. The fact that you cannot see my property was a selling point when I bought. Behind the pipeline right of way which the gas company keeps cut, is the uncut forest. It is so thick you really cannot see the survey roads.  All of us were content to let those roads serve as borders on the back half because they provided access through the forest and they were already there. .

My neighbor on the right even installed a shooting range that I knew was divided by the property line. Nobody cared. Then something happened. About 2-3 years ago my neighbor on the left sold her property and the buyer had the property surveyed. We had already marked the front half based on existing survey stakes and had installed fence years before. Due to the thickness of the trees the back half had been a big guess. Mostly the new line was in my favor and I gained as much as 20 feet on each side at the back.

If you click on the pictures in these galleries they will enlarge and if there is a caption, it will appear. 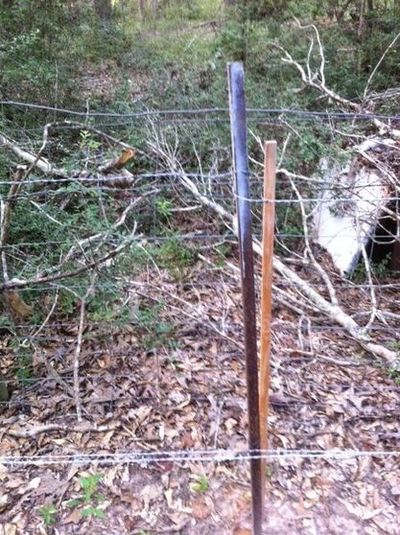 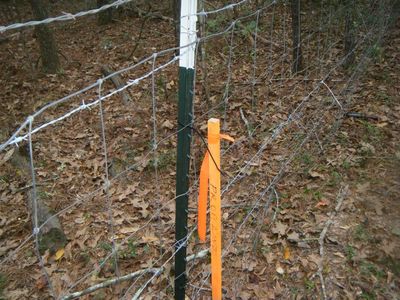 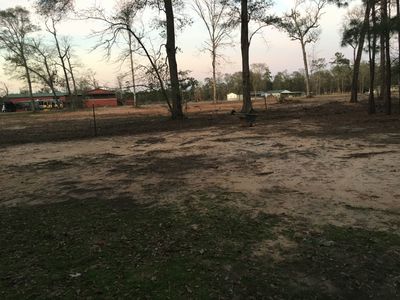 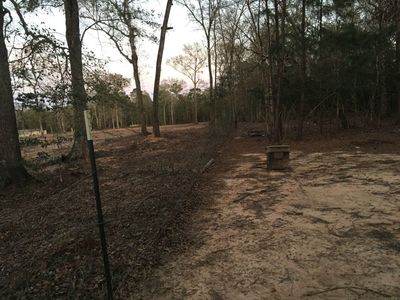 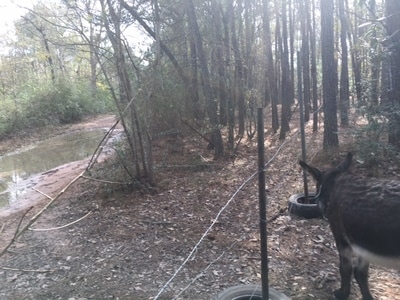 It seems like nobody wants to walk a property line with you but luckily they will take your word when you do the heavy lifting. I measured distances and set the boundaries on the right side. Then I wandered through the trees with my iPhone compass. I had already discussed the situation with my neighbor and told him that the trees were so thick it was impossible to be accurate. Bias would be towards fencing in some of his property and let my donkeys thin the brush. We will return when mutually convenient to measure it together. The feast of the donkeys has been working nicely.

This whole area in the back is under water for a time after it rains so I decided to make the fence a bit more stable. No fence across the pipeline right of way that cuts through the property has lasted more than five years. Wood rot and soft ground has doomed them and there have been at least three attempts. This time they were steel T-poles with tires set about them. The tires will be filled and, hopefully, they will stick above the waterline. 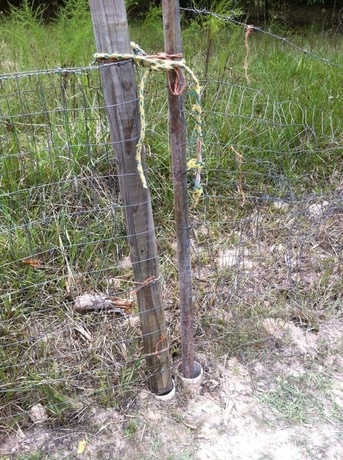 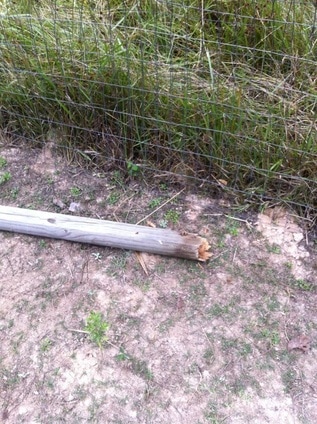 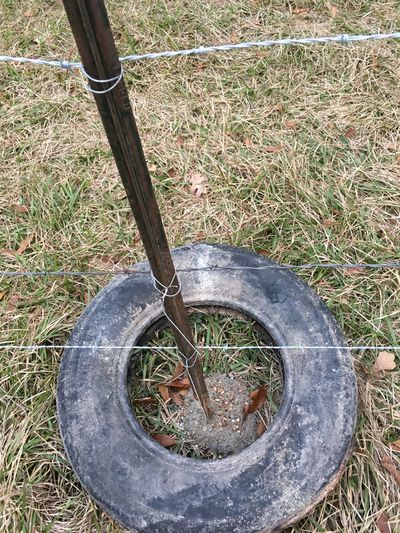 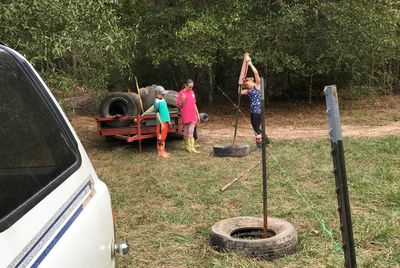 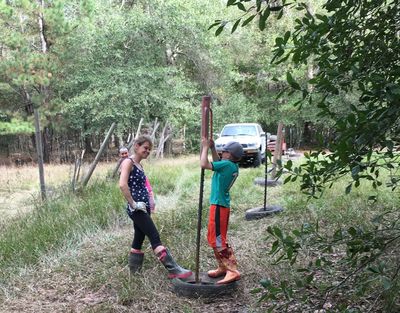 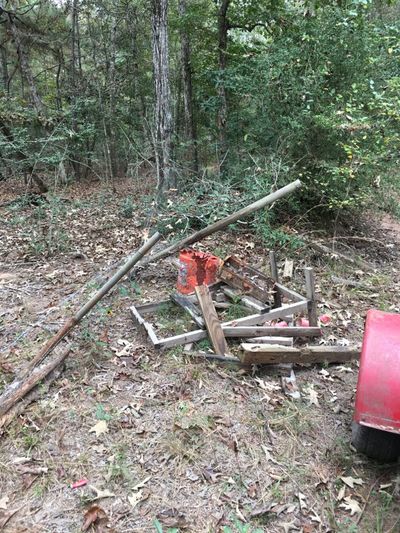 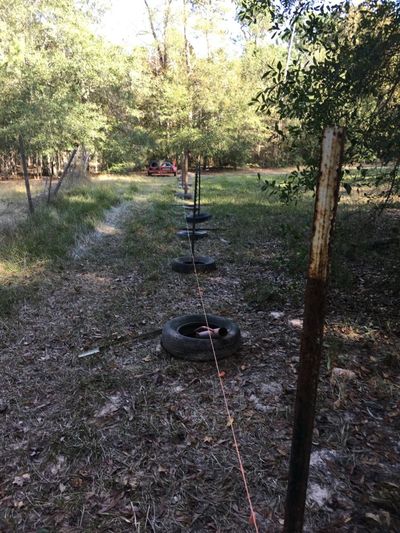 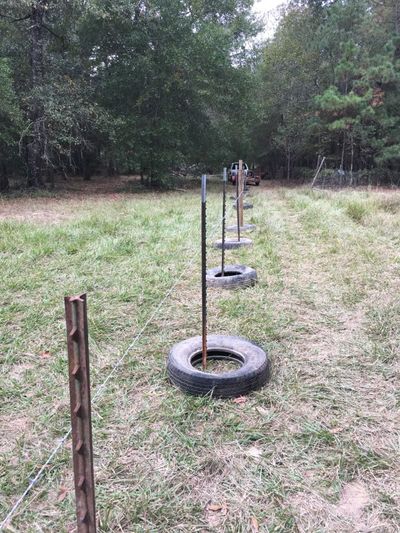 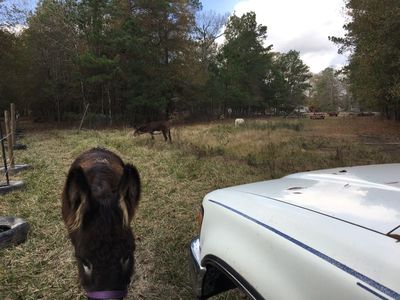 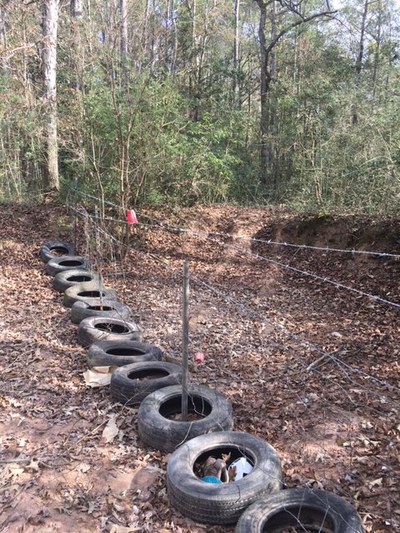 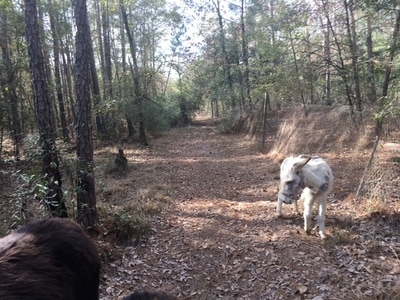