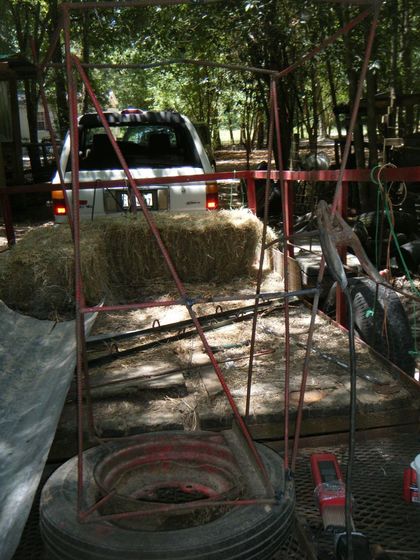 Who knew this would develop into such a contest. They break it and I make a new one. The battle escalates just like the cold war arms race.

This was my first attempt at making a feeder. You have an old (pre 1967) vw beetle wheel and tire. A box was built on top using rebar. It was just adequate for containing a bale of hay such as the ones in the trailer.

I made it for the first donkey, Eeyore, and a collection of American Blackbelly sheep. They of course, viewed my attempts at feeding them efficiently and effectively with quite a bit of humor. It was effective, as it did hold the hay and dispensed it “on demand”.  The problem was that Eeyore would ensure that they went through a bale every day and you could see it in the mud and manure surrounding the feeder.

​I reduced waste somewhat by attaching the metal to it to cover a  couple sides. 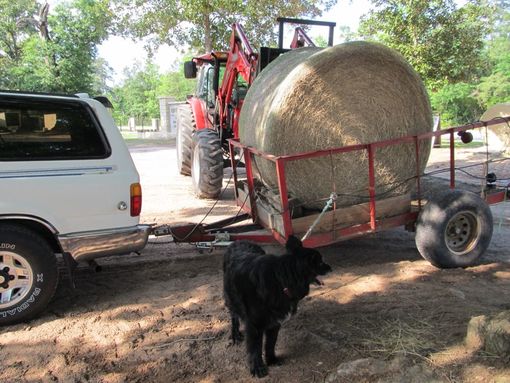 With that sort of consumption we needed to take another route. Cost of square a bale of hay shot up to $10.00 per bale with the onset of the drought some years back. Strangely, when it began to rain, the prices remained elevated.

​ By volume one of these round bales contains the same hay as about 20 square bales with one big advantage. Instead of $200 this round bale is normally about $65.00. Being able to leave it in the trailer and having bars on the side simplified things greatly. I retired the vw/rebar feeder until such time as I might need it. 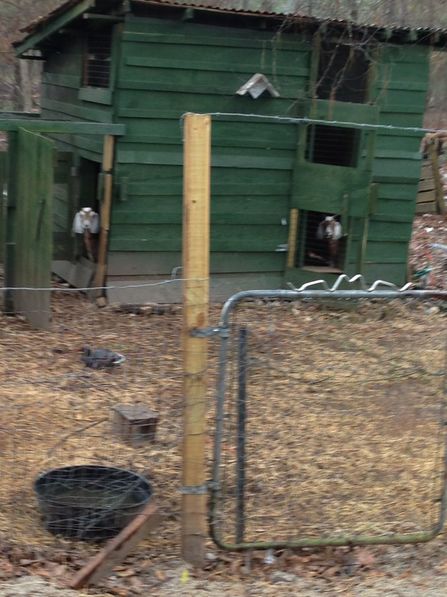 ​These two dainty little Nubian goats (Beau and Jack) were when I needed it. You don’t see the feeder here but that’s just because I didn’t get it in the picture. It served very well for them and moved with them into the pasture when I finished their shelter. They might weigh 30 bs in this picture but that certainly changed. 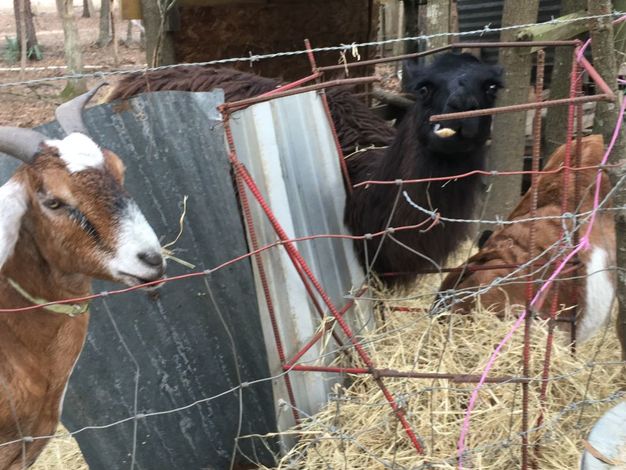 A more recent picture of Beau, Jack, and Hershey. The feeder was clad with metal roofing panels on 2 sides and partially on the other two. This reduced waste but you can see that they managed to wreck my engineering. Unfortunately, they did it without much effort. Obviously something else was needed.

Beau and Jack have just about tripled their weight from the  picture just above. 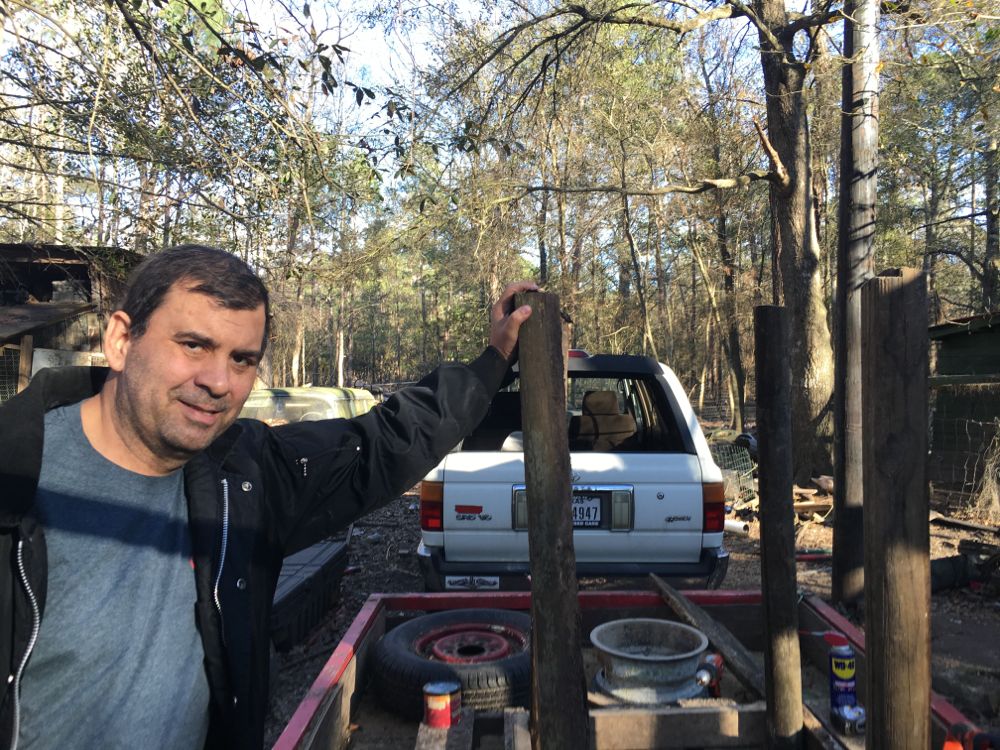 Well I went out and got some professional help. Tim and I were determined to build something that those sorry little goats couldn’t wreck. 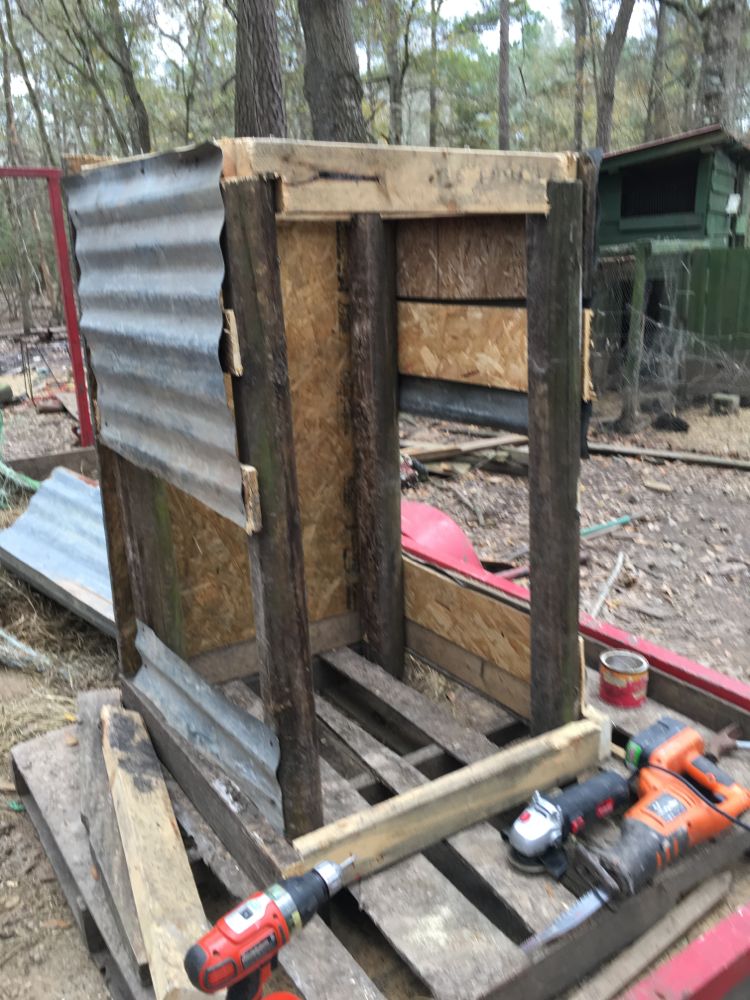 I figured that landscape timbers were just the ticket.I used this pallet as a base.

​Good solid wood and bound to last. As it turned out, not really.... 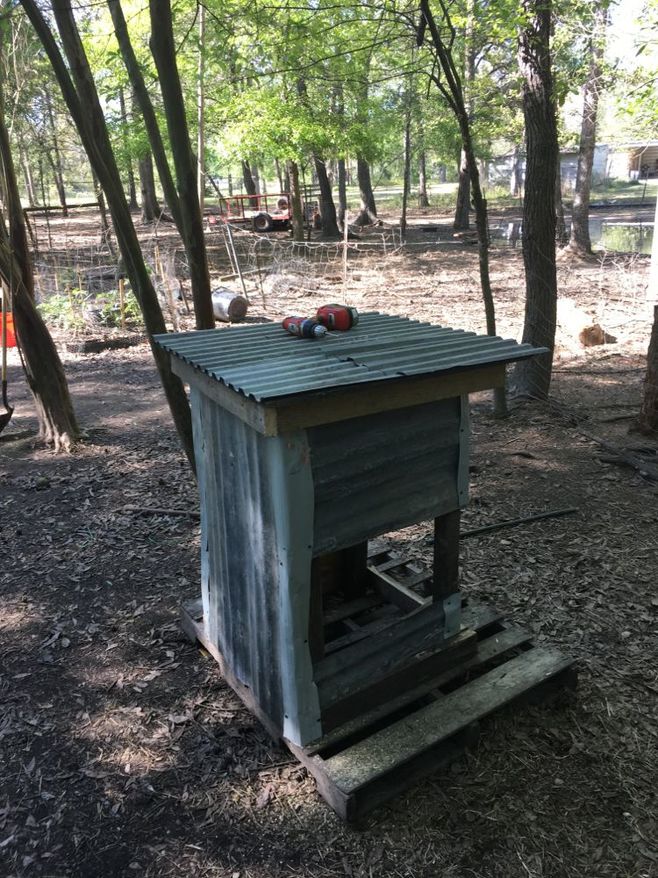 It ended up looking like this and I was pretty happy with it. I would put the hay inside and the 2-3 times per day that I would pass out the feed pellets I would spread them on the top. It actually worked out pretty well for several months.

If you want to see a llama spit just put the food in one pile.  Goats and llamas co-exist pretty well but if you feed them together you can see them get pretty possessive with their food.  The llama was with them for protection but the goats are big now and don’t behave like prey animals. It would probably be smart to split them.

​The problem is that they have become buddies and I doubt they would tolerate being split up very well. Fences are more effective if your critters are happy. 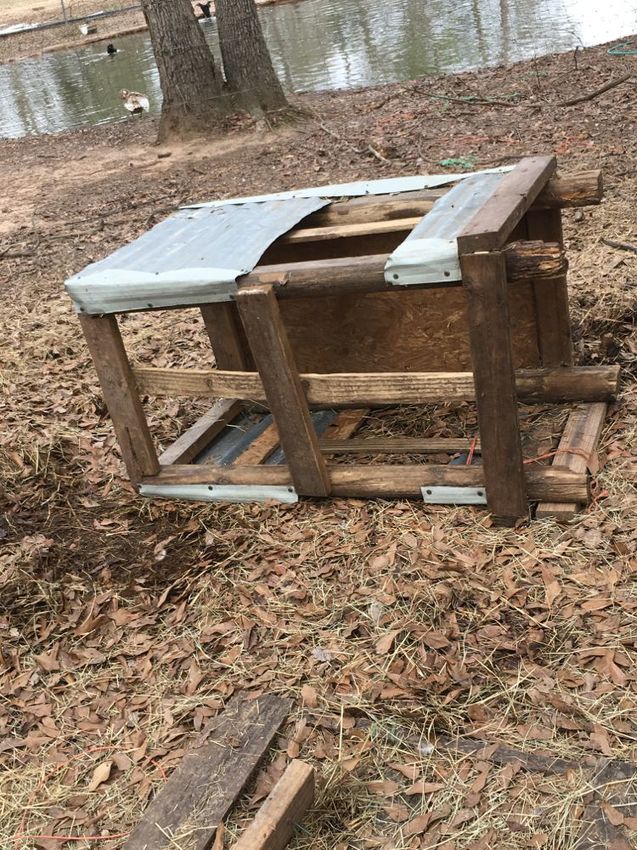 I put this back together and caught him butting it right away. It didn’t last. Probably  because the pallet and landscape timbers are deteriorating. I expect that’s from wet hay and who knows what. What I do know is that when I put it together the feet of the posts were not deteriorated like this. 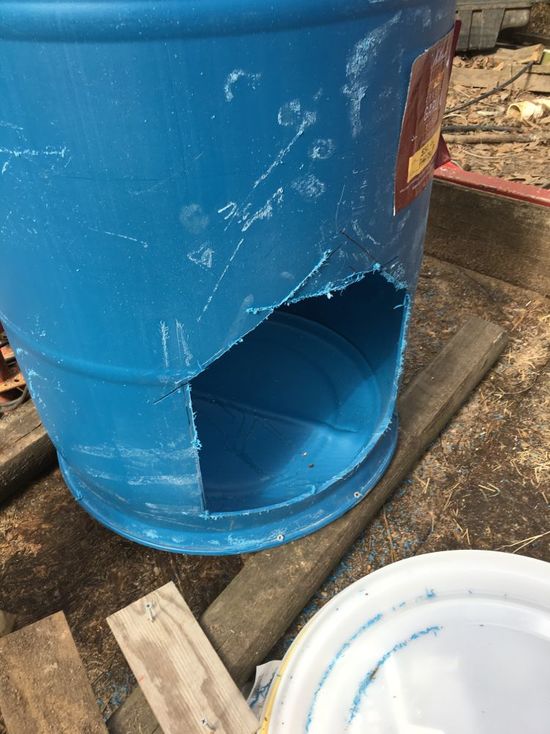 Some clever devil figured out how to make a feeder from a drum.

​I read about it and thought I would try it. Did plastic instead of metal to avoid any sharp edges. Immediate problem was that I had measured the barrel to see if the hay would fit. I did not realize the top necked in so severely. 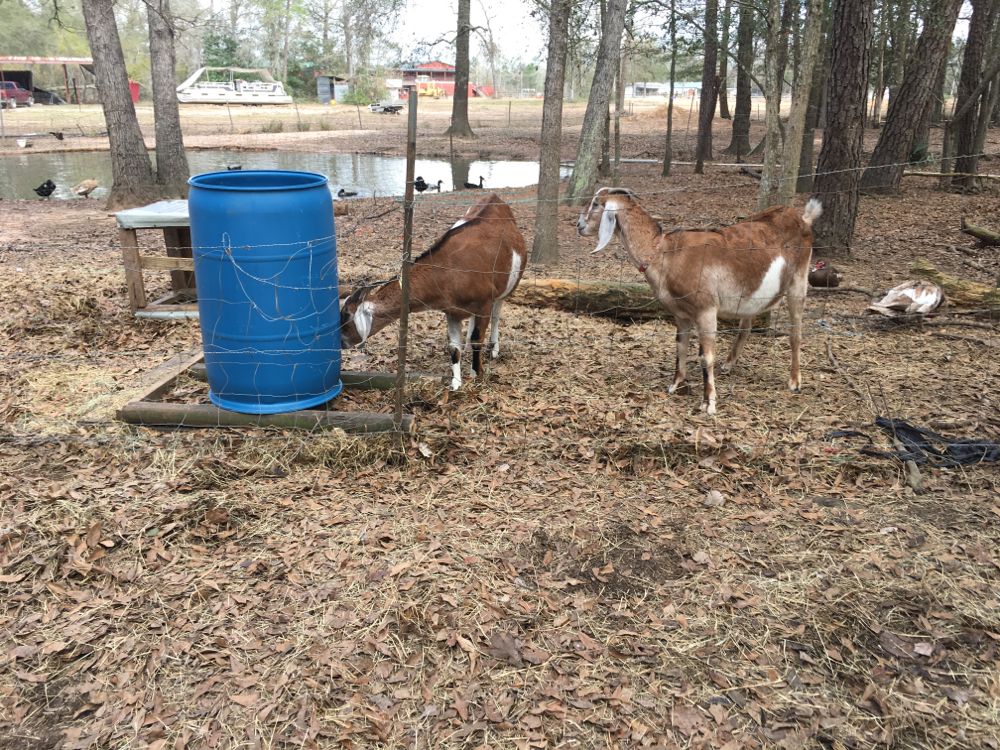 They loved it. They also loved smashing it into the fence and Beau got out a couple times resulting in the aforementioned bulldogging. So the next stop for this barrel will be as two laying boxes. Of course that left me with fixing one of the two prior attempts at the perfect feeder. I decided the wooden one was the best but knew better than to trust the pallet again. 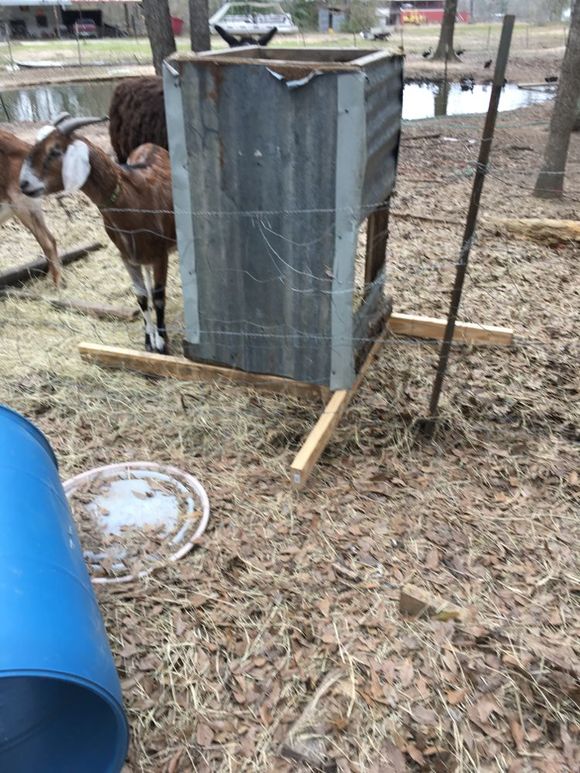 
​Generalization is the ability to take something you learned in one lifetime and apply it to another. The base of this is how I made forms for rebuilding chimney crowns. They may turn out to be inadequate but, at least, they are screwed to something solid. 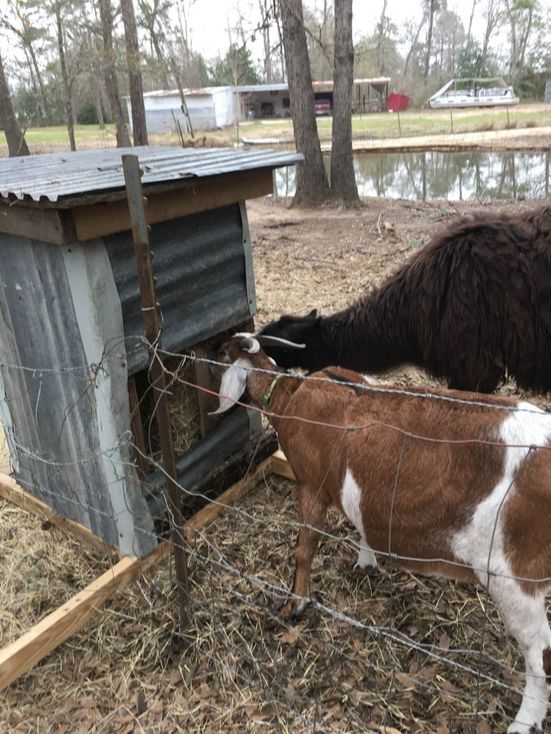 If this thing bites the dirt I already know my next step. Unscrew everything and rebuild in place with 4X4 corner post, lots of braces, and cross pieces of 2X6 or corral board. I would have to build it in place as it would be too heavy for me to move.

As of today, it's lasted a week which is longer than the barrel did. Wish me luck.