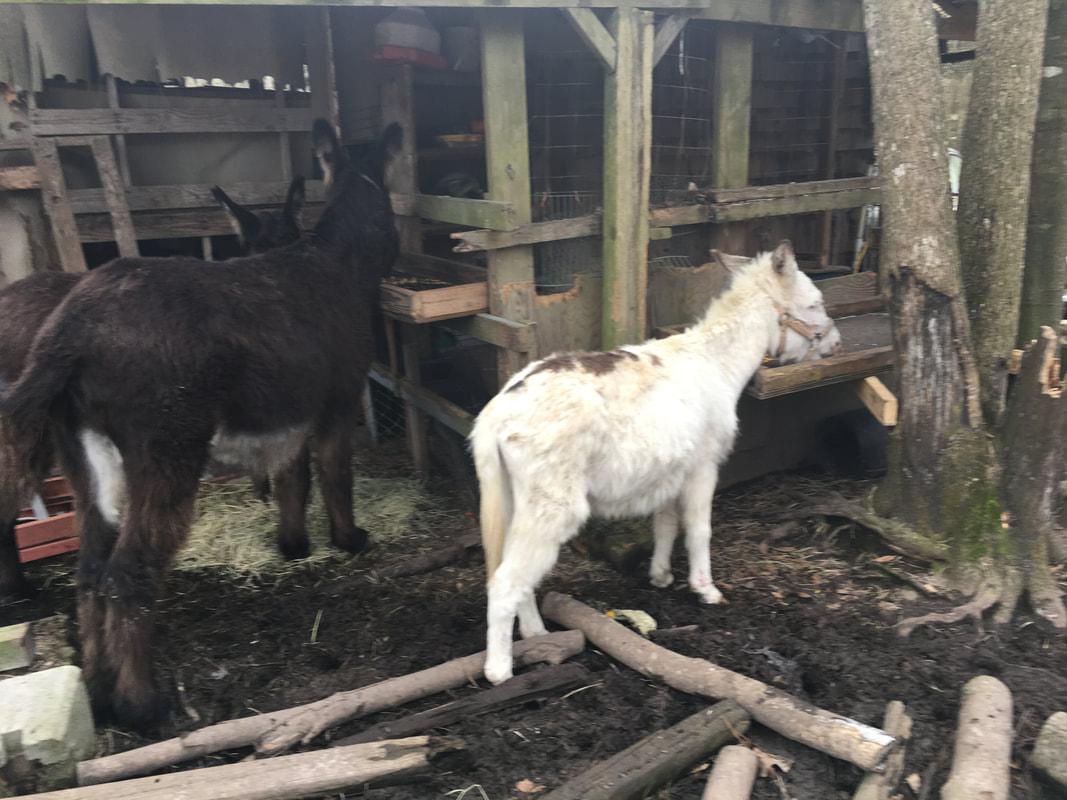 In late July my laptop decided to quit working. I bought it from ebay and probably shouldn't have bought second hand. Too late to ponder now but there were a couple reasons I went from a Mac to a pc.

There was an episode where Apple wouldn't make or change an appointment without a password even when I was standing in their showroom with picture ID.  And,

I found that the new mac notebooks were coming with no usb ports or dvd players. Storage was in the cloud which means forgetting your password gives you an immediate electronic lobotomy.

​ We have a good repairman but we found Costco would sell a new HP windows 10 laptop for the price of a used apple. It has usb ports but no dvd player; Have not figured what I need to make my external dvd player work. Will get to that next.

I had to learn how to work a decidedly inferior photo system. Of course the latest iPhoto program was decidedly inferior to the first one I bought so no big deal.  I went online and got a free abbreviated photoshop program that I'll get around to learning someday. If I can get a handle on this keyboard (positioned differently) I may get something done. I just found the button to light the keyboard. That helps a lot.  By the way, if you are wondering where the donkeys figure into all this, you didn't miss anything. I just thought I would whine a bit and this story is really me trying to form new muscle memory with a new computer. 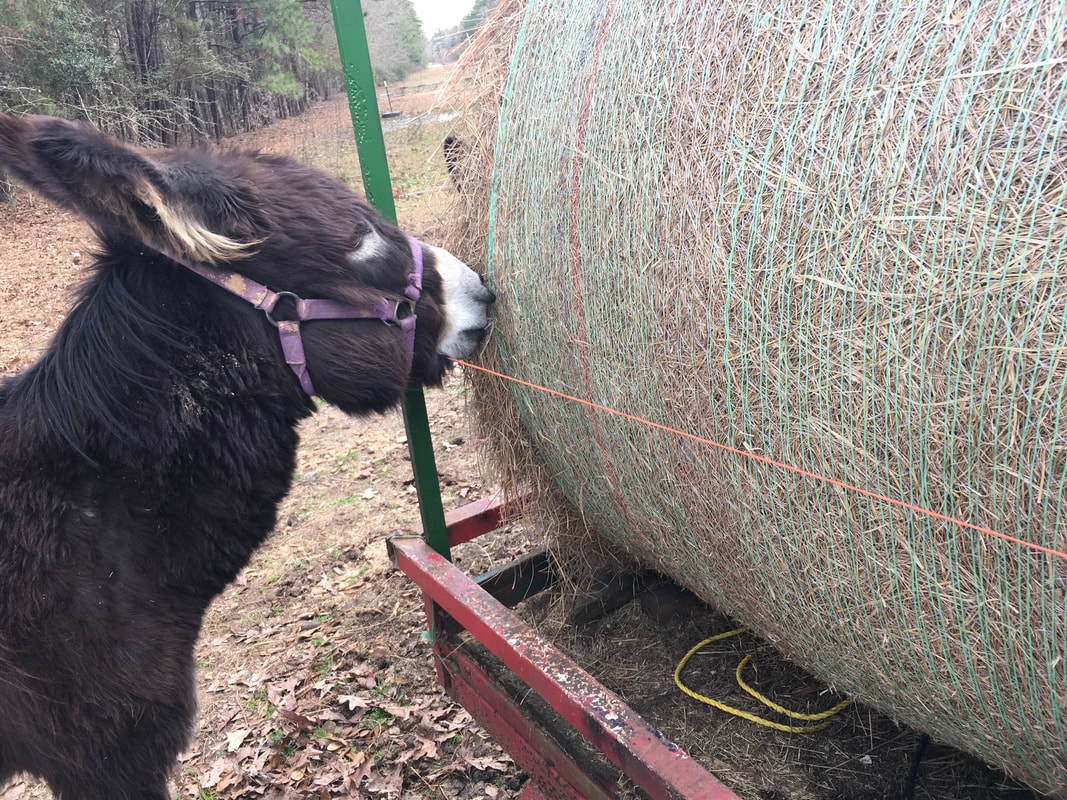 ​
I thought that I would relate what I do when Princess issues a royal decree for fresh hay. She is our youngest donkey and well behaved except when I challenge her by letting her pantry run low. She promptly goes next door and starts to work on the lush grass they so callously grow. She prefers that to the weeds in our yard but unbelievably prefers hay to either.

We weren't overgrown until the land was overgrazed by grass eaters who turn up their nose at the weeds. We have a goat that can defeat a sound fence even more easily than princess. When he sees me watching him, he knows he is caught and shinnies back under the fence.  I always promptly feed him as a reward and this stimulus/response stuff really seems to work...... until they get hungry and you fail to respond quickly enough for them.. 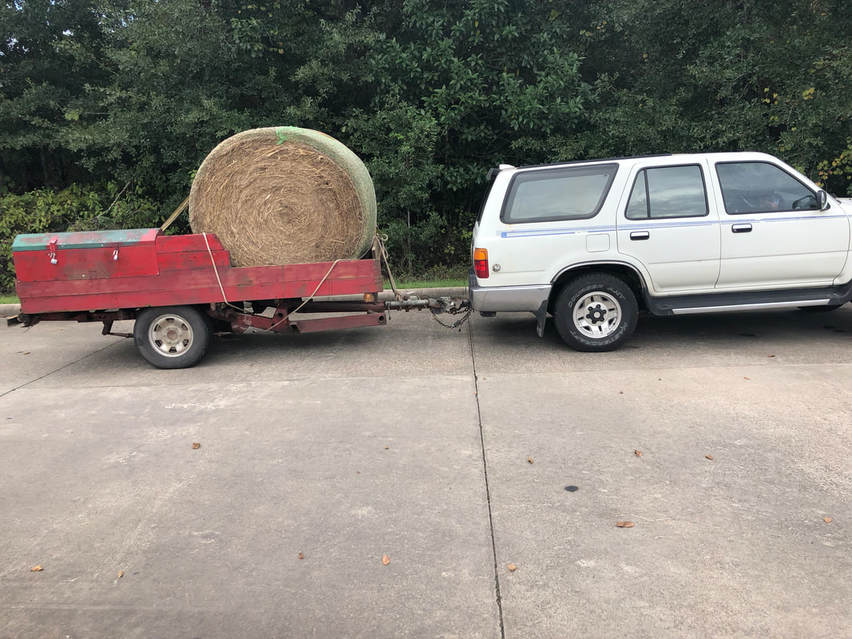 This is the mechanical beast I frequently call Mi Burro. I suppose I prefer the flesh and blood variety of donkey to the mechanical one. I don't know why because this has done everything that I ever asked it to do for the past 5  years.  We recently had to do some repairs so I guess the magic is gone.  I can see that I have a new set of shocks or overload springs in my future but everything still works great.

It is a 1995 Toyota 4runner that has more than 225,000 miles on the odometer. It just passed it's last smog inspection.  Beating on any vehicle hastens repair, however, I am told that during the mid nineties Toyota was the toughest brand money could buy. I think it might be true.
​
These round bales  are about 1500 lbs. I never weighed one but I was told that and the springs on the truck and the trailer both seem to agree.

When princess has started the trips to the neighbors yard it is time to go see Carlos over at the hay yard. He is a pretty impressive kid. He knows his product and has been pretty liberal with his knowledge without trying to upsell me. I knew going there the first time that one has a  lot of freedom in the hay you feed cattle, goats, llamas, and donkeys. Not at all finicky like horses. I always buy the cheap stuff. Carlos has a big tractor with a spear point on the front lift. He can put one of these bales almost anywhere. That's all great until you start thinking about how to unload it. 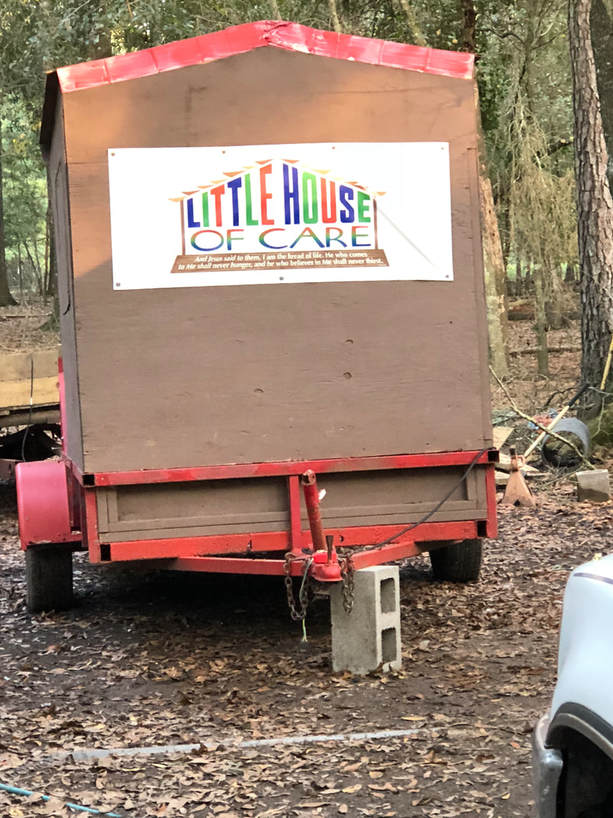 It has a new job now. Since it started feeding the homeless in July I have had to use my everything trailer for the hay.

That obviously means if I need a pickup load of anything from mulch to lumber or rock it has to be unloaded before the next need.

No good deed goes unpunished but the punishment involved in unloading hay is pretty simple. It just requires a spot where water won't collect for long and something solid like a tree nearby. 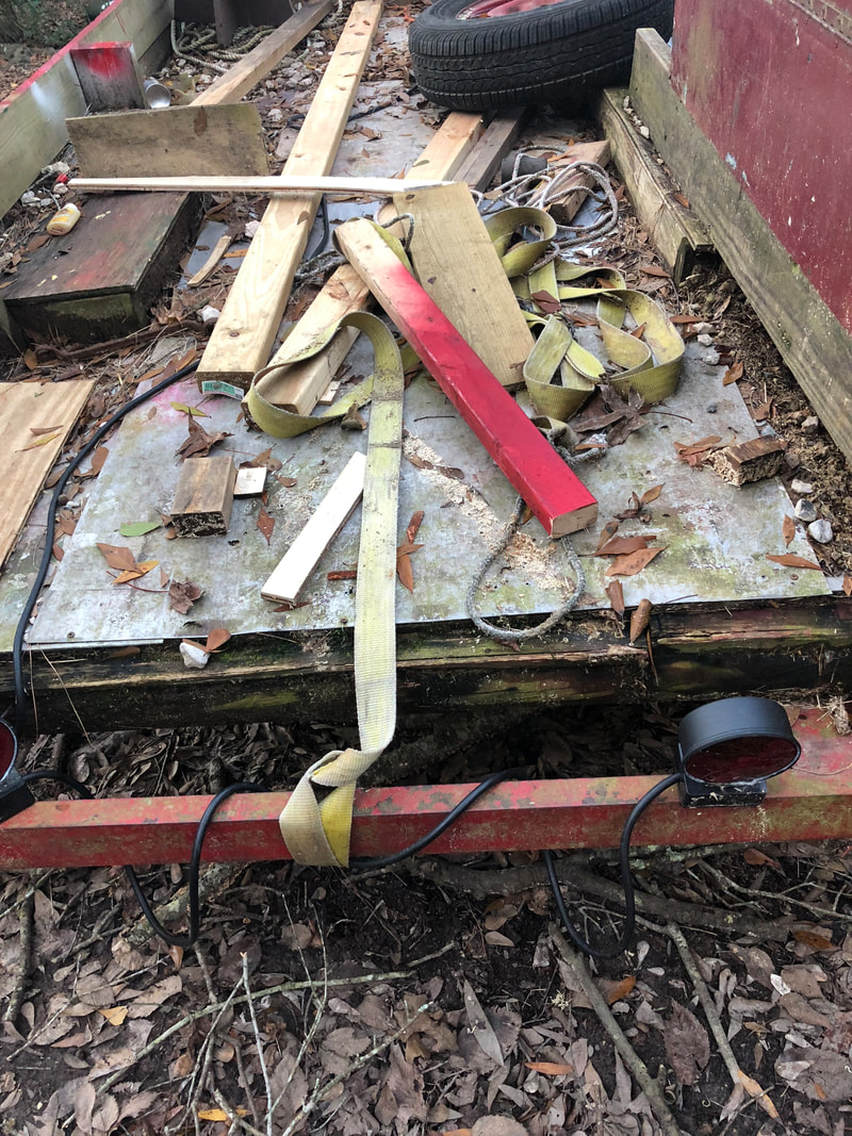 When you get old it's better to use brains than brawn. The line you see is a long nylon (or other synthetic) strap that you could use to pull a vehicle out of the mud.  That strap gets wrapped around the rear bumper as you can see. 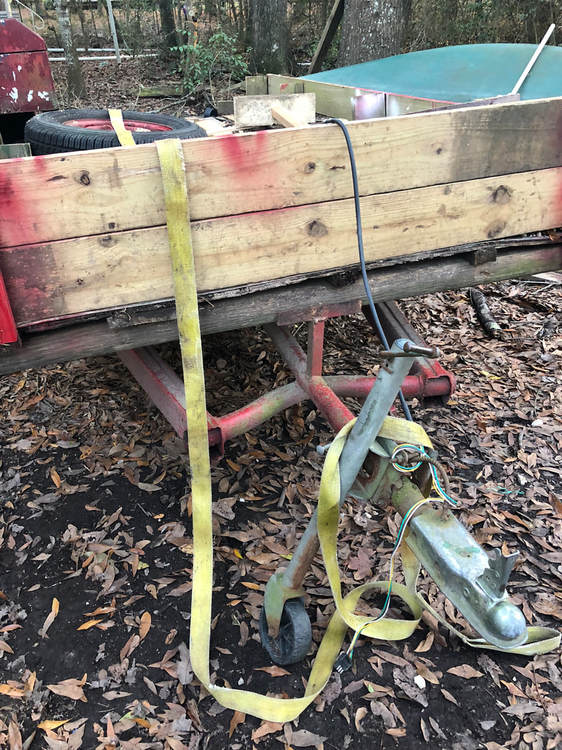 ​The next step is to run it up the center of the trailer so that when the hay is loaded it cannot help but be on top the strap.

I normally just wrap the strap around the tongue and tie it so it won't get loose.  Now it's time to go pick up the hay and get princess back in the yard.

When Carlos loads the hay he normally puts it in with a weight bias towards the front of the trailer. It can be anywhere from the center point forward. The important thing is that the tail must not wag the dog. This seems obvious but it can easily  be forgotten.

Even with a small flat spot on the bottom of the bale where it's been setting for a while, you basically have a round object that loves to roll.

You absolutely have to prevent that. I can scarcely contain myself contemplating the joy of a load of hay dumped in the middle of a busy highway.
​
I normally carry a fairly long rope in the trailer when I'm doing this. Going back over the bale makes it pretty secure if you drive slow. Go across a couple times in front {optional if the front of the trailer is sound} and certainly in back. I've never had a problem. You can almost see those lines in place in the picture of the truck and trailer above. 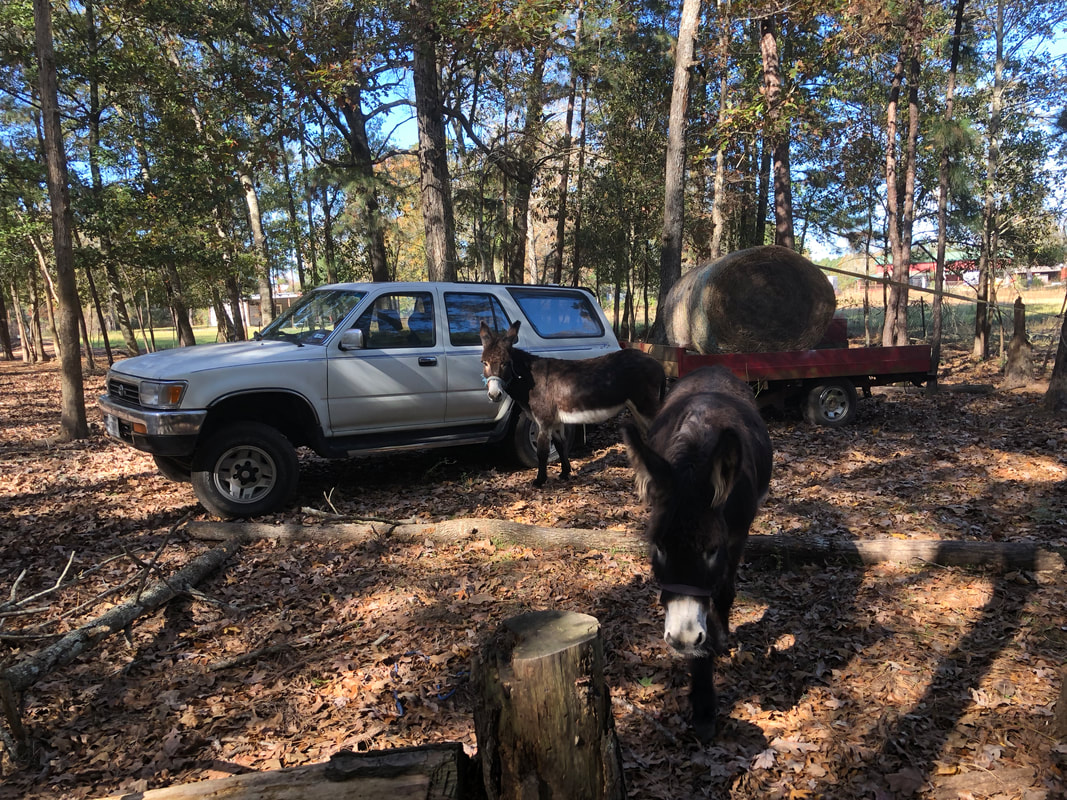 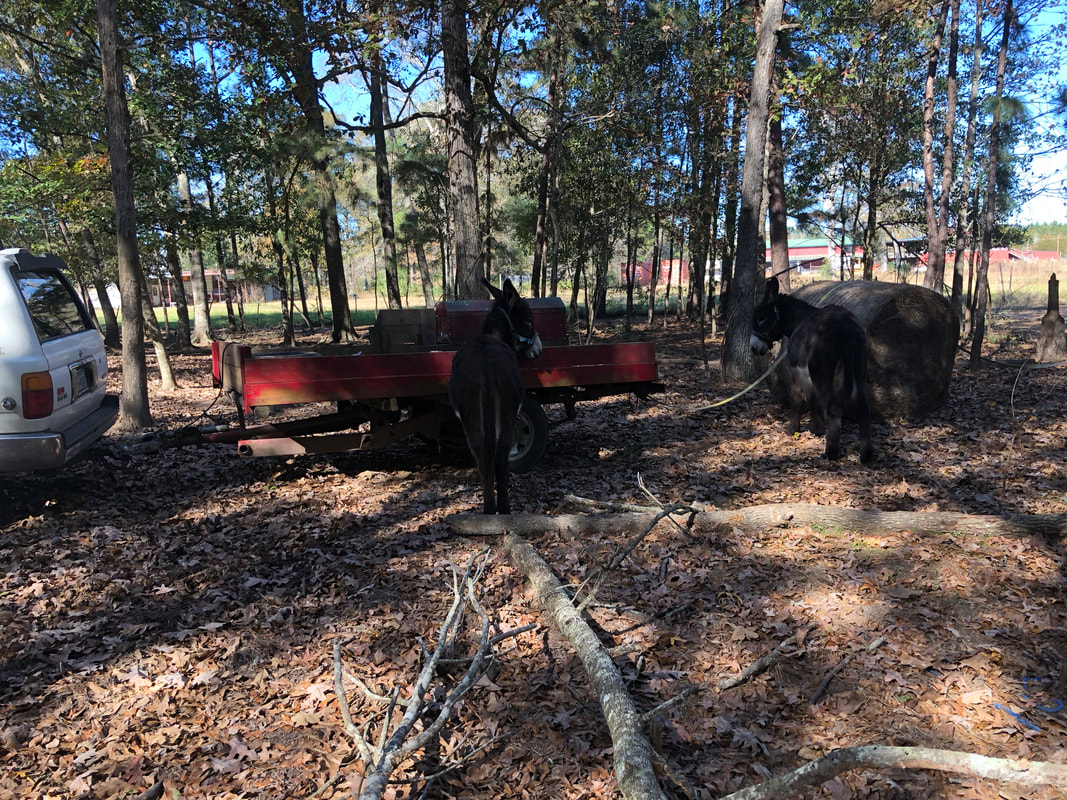 Drive out from under it. Untie the strap, throw it back into the trailer and go about your business.
By this time the hay has become the donkey's problem and not yours.


I am convinced this the  best way for a load that will roll and feel it could be adapted to other types of loads so long the drop won't damage. Perhaps it needs a piece of cardboard or plywood under the load for sliding purposes in some cases. You can also roll it out with a come-along {hand cranked winch) but I really don't like to do that.

I used to worry about covering it but have found that the donkeys will see that it does not spoil. Just don't dump it where a puddle will develop. Princess will make sure I know when it's time for this little dance to occur again.

Years ago I thought things had to be perfect. The donkeys don't care, therefore, neither do I. I still have a feeder that I can attach but I no longer bother.