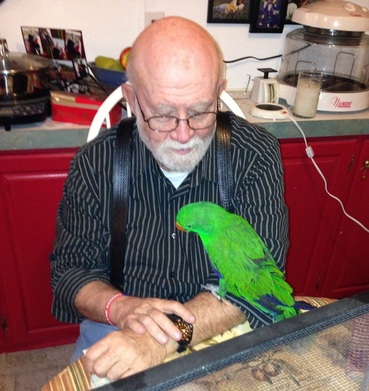 I don't know how we got here but this blog now has over 100 stories and it's getting a little bit tough to navigate. The whole purpose of this article is to replace the original home page, help you navigate through the contents, and to introduce ourselves in a small way to you.

The individual on the left is Lee Wilcox. Lee, wife Sally, this Parrot, a second parrot, 5 donkeys, 2 dogs, 20 plus chickens, a llama, a dozen guinea hens, and a batch of muscovey ducks all live on 5 wooded acres close to Grangerland, Texas.

Sometimes a person's mind just won't shut off and it's good to occupy it with something that might prove enjoyable to others. The statistics on the site tell me that 2-300 people read this on most days. I don't intend to talk much about Sally or I in the stories so I think it's fair to introduce us now. 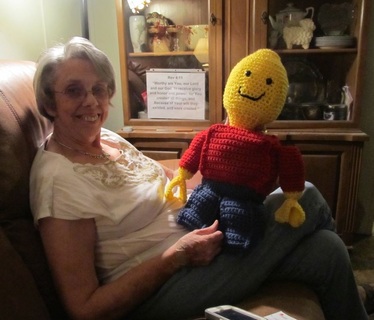 This is Sally. She is the person primarily responsible for starting this blog.I guess she got tired of me moping around the house in my newfound state (retirement). We had opened a site to augment her job as editor of the Texas Challenge (Freewill Baptist state newspaper) and I think I got in her way. I kept coming up with stories I wanted to write that didn't fit on a denomination publication.

For whatever reason she worked on getting me started doing this. Between us we possess a lot of knowledge about computers. She has 95% of that knowledge and I have 5%.

Now she is also retired and she spends time making presents for the grandchildren. This is a lego man. I don't know much about crochet but I think she is pretty good. Maybe I can get her to contribute here if I ask nicely. 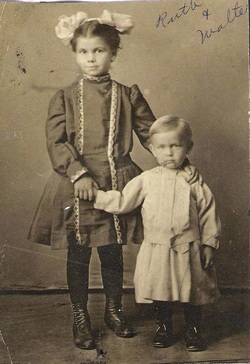 This young lady is my mom and she is holding my uncle who would probably rather be elsewhere. She passed away in 2007 just a month shy of 102 years old. She left plenty of memories behind.

She left a sheaf of papers that were handwritten. They were what she wanted to pass along. I don't remember how many pages but when they were typed they amounted to 35 pages. I didn't edit those pages really, but I did find pictures on google images that represented the events and the times.

You will find these stories under Mom's Memories. My sister Carol and I both added an article of our memories of growing up with her and Dad. Carol was the archives (pictures) and I had the vehicle to publish them. Guess it was a limited partnership. Limited means you can't sue and I hope she isn't going to.  Moms memories can be found under family right after Sally and my travel hi-jinks. 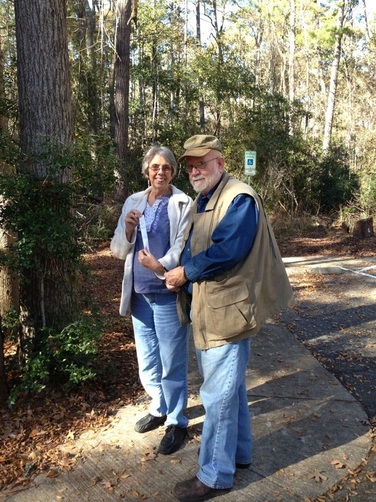 Geocaching is another thing in this section. It would jump out if you hit Texas instead of Canada. If you don't know what Geocaching is - folks hide things and you find them

All you need is a smartphone and a $10 app. The app tells your phone the GPS coordinates and your phone leads you close. Some of them are very clever. One of our Granddaughters told Sally that the kids in high school were doing that last year. Actually I expect it's been longer than that but we were the last to know.

As we become older it is increasingly difficult to add to this. It was a lot of fun.
The Eclectic Gearhead. There might be better names but this is written by a guy who likes to be outdoors working on stuff.

The redneck engineering section contains stories about all sorts of work I have done on the farm. The title is half misleading. I am a redneck but I am not an engineer. I have done some welding, some carpentry, some concrete work and probably more. Not much that I do is pretty but most of it is going to last a long time. You might find this humorous or you might not like them at all. None of these projects are going into the better homes and gardens magazine but I have figured most of them out myself and done them my way. Reality check: I'm not above stealing a good idea.

Flotsam and Jetsam could probably be categorized better. To this point it is primarily about experiences in or memories of submarines and Navy experiences in general.. I spent time on them during the cold war and part of that time was in the Vietnam area. Not all of the cold war was cold and a lot was exciting. It does qualify as gear-head stuff for the most part. Some of these articles have been publicized on the submarine Facebook pages and I haven't received any hate mail yet. Keeping my fingers crossed.

Chimneys 101.  I was a chimney sweep and certified by the National Chimney Sweep Guild. I have tried to make this section a primer on chimneys. If you have a chimney in your house you should read this. I think that even if you are experienced you will learn something new.

Homeless Ministry. Since June 2019 Sally and I have been involved (with a few of our friends) in a ministry to feed the homeless in our community. There are other organizations who feed far more and the only real reason for ours to exist is that we are mobile. As we developed I kept track of what we did and recorded them here. I ran out of space to add new titles so I just composed a directory to simplify finding them. Link included here www.grangerlandrfd.com/directory-of-homeless-posts.html