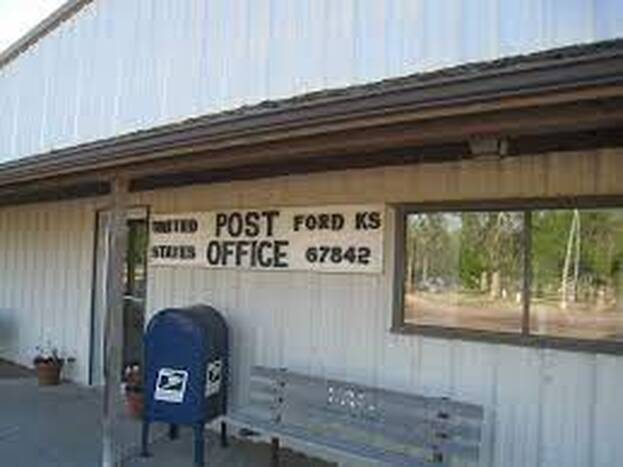 Courtesy Google advanced image search
Many of the fondest memories from my childhood involve my frequent visits to the sprawling and bustling metropolis of Ford, Kansas to see Grandma Ruth and Grandpa Ivo Wilcox. It was always an exciting time for me, and I believe for my brothers as well.
​
The small and nondescript house on Mulberry Street may have appeared rather unremarkable but nothing could have been further from the truth. Grandma and Grandpa’s house was a treasure trove of love, food, activity, and imagination. 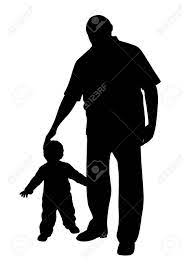 Courtesy google advannced image search
​I will always remember navigating the narrow brick walkway from the house to Grandpa’s workshop to “help” him with his carpentry. I remember the coffee cans filled with hardware and the vast amount of tools that littered the shop. Having little to no mechanical ability in my youth, it is amazing that I didn’t seriously hurt myself hammering and sawing on random pieces of wood, but I have a strong feeling that, though I was too busy to notice, Grandpa was within arm’s length to make sure his grandson didn’t lose an arm on his watch! Though I am sure Grandpa had actual work to accomplish as he built houses in the surrounding neighborhood, he was never too busy to let me come out to the shop and participate.

His patience almost makes up for the unbridled fear that he caused me when he would continually sneak up behind me when we were visiting, and with a loud roar pick me up and lift me into the air! If this were to happen at my current age paramedics would need called to resuscitate my heart! Grandpa always got the most joy out of doing that and would laugh uncontrollably at the look of horror on my face until I realized it was him and relaxed. For some reason, I would be just as shocked that this same scenario would play out the next time we visited! Looking back now, it really was funny!

I remember being with Grandpa in his shop once when I was in my teens. I don’t remember what happened, but for the first and only time, Grandpa uttered the F word in my presence! It wasn’t directed at me. Perhaps he hit his finger with a hammer but my jaw dropped! It was at this point that it started to sink in that Grandma and Grandpa were actually just regular folk. They were on such a pedestal to me in my youth that they were almost other-worldly! As I reflect now, I appreciate that he was so comfortable around me that he spoke like he would around anyone else.

There is another funny story that comes to mind involving Grandpa. I was in my early twenties and visiting for the weekend. On Saturday I accompanied them to the Dodge City Payday IGA to get groceries. If memory serves we had taken the Maverick Grabber with the bumper sticker that read, “Watch my rear, not hers” but I digress! We had finished shopping and were checking out when out of the blue Grandpa asked the teenage sacker if they still carried Bull Durham tobacco, which I understood was his brand of choice until he stopped smoking. The young man replied that indeed they still carried it and asked Grandpa if he would like some. To my surprise, and I am sure to Grandma’s surprise as well, he said yes. So the sacker went off and came back a few minutes later with the tobacco. Grandpa studied the tobacco for a bit and then handed it back. He told the sacker, “Thanks, I just wanted to see it. I don’t smoke anymore.” I laughed until my sides hurt! 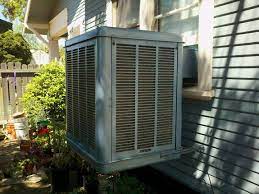 Courtesy google advanced image search
To this day I still remember the layout of the house. I remember the paneling, the carpet that would stick to my toenails, the collectibles in every available nook and cranny. The space heater that provided warmth in the winter and the window air conditioning unit that was supposed to provide relief in the summer but never quite produced enough to satisfy me! I have a deeper appreciation for central heating and air because of that window unit! (Edit: the Dodge City area is dry enough that the AC people used was an evaporative swamp cooler,


I remember sleeping in the west bedroom with the window open on a warm night and the panic that filled my body when I would hear noises outside! I remember being afraid of ghosts in the huge closets that were in the bedrooms. I remember spending hours playing on the small organ that was there when I was growing up. I remember the freezer in the cement-floored room next to the back door where Grandma’s ever-increasing supply of ice cream was stored! With absolute fondness I remember the large dining room table where the most wonderful meals were eaten. The much desired fried chicken dinners! An article could be written on Grandma’s fried chicken alone. And those wonderful artery-clogging breakfasts with eggs, sausage, bacon, more bacon, and perhaps more bacon! I always smile when thinking about meals at Grandma and Grandpa’s house. It did not matter if I had already eaten enough for five people the following conversation would invariably take place:

Grandma, “Honey, did you get enough? Would you like some more?”
David, “Oh Grandma, I am stuffed and could not eat another bite!”
Grandma, “Are you sure you got enough?”
David, “I have never been so sure of anything in my life Grandma!”
Grandma, with a worried look on her face, “Well, OK then but if you need more let me know.”
David, “I will, thank you Grandma.” 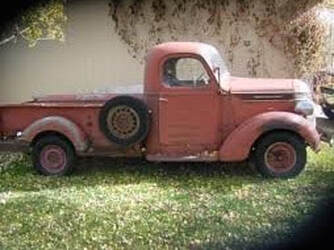 Courtesy Google advanced image search
The outside of the house made for a fantastic playground. In my early youth the huge open lot north of the house made for an ideal football and baseball field. Many hours were spent there with my brothers. I also loved to nose around in the detached garage. For some time Uncle George’s old red International Harvester pickup sat outside the garage and I loved to sit in it and pretend I was driving. I also loved to do the same with Uncle Lee’s Chevrolet panel wagon but please don’t tell him! I spent a lot of time sitting in his car! 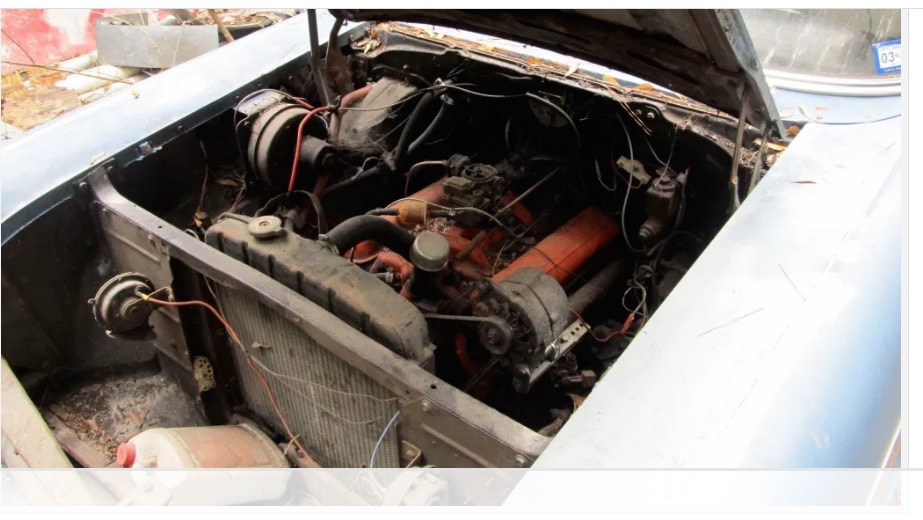 This picture actually is the car.
Near the shed where the lawn mower was stored always sat a collection of motor oil cans from when Grandpa would change the oil in the car. My brothers and I would pretend we had our own service station and fill cars up with gas and oil. As far as I remember, I never actually added any oil to Uncle Lee’s Chevy! 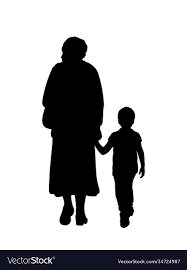 courtesy google advanced image search
I have many memories of Grandma from all the time I spent around her both in my youth and my adulthood. One memory spans this entire time. When I was young I apparently would sit on Grandma’s lap and count the buttons on her dress. Even as a lad I must have had an acute knowledge of the human anatomy because as the story was repeated by Grandma on three, or four, or nine-hundred occasions, I counted “one…two…three…where’s your belly button?” Grandma told me this story right up until the end and she always told it with a hearty laugh, which made me feel really good! 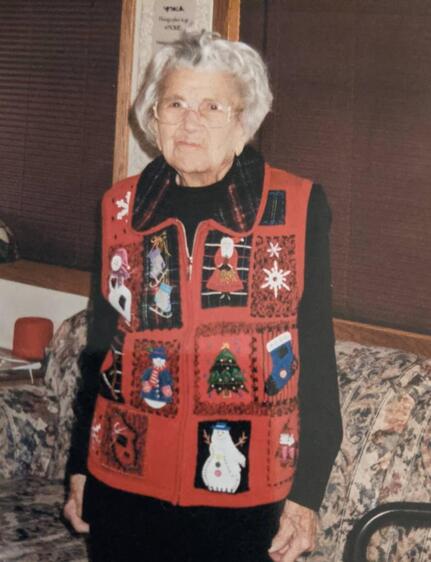 ​When I was in my mid-twenties my wife Sarah and I bought Grandma a red and green Christmas sweater. I truly believe that she wore that every single Christmas and she would always comment on it when we would see her at my Mom and Dad’s house on Christmas Eve. The fact that she liked the sweater that much always made me feel happy.


I know that Grandma always enjoyed seeing my kids during the years she lived in Cheney. I am grateful that she was able to meet four of my five kids during her lifetime and that numerous four-generation pictures were taken to celebrate her longevity. 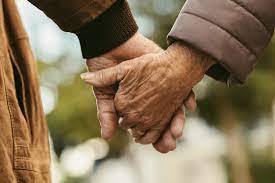 Courtesy google advanced image search
​I have so many wonderful memories of my grandparents that it is impossible to list them all. The most important memory though is of the love they provided and the level of safety I felt when in their presence. Their love for each other was inspiring and is to this day my measuring stick for what a marriage should be.

They lived a life filled with hardships and endured things that would tear many couples apart. Their love and commitment never wavered however, and I would argue, was made even stronger by the hardships and circumstances of their lives. This love was in full display right up to Grandma’s last days. As I was visiting her at the Mount Hope Nursing Home it was just her and I in the room. She told me she needed to ask me a question and was visibly shaken. She asked, “I think I know the answer but need to be sure. Is Dad gone?” I answered that yes, Grandpa was gone and she simply smiled. I believe she was ready to be reunited with Grandpa. What an absolute example of selfless love. Grandma knew she was nearing the end of her life on earth but her thoughts remained on the husband she had lost twenty years before.

​The concluding act from a life spent in matching chairs reading the “Dodge City Daily Disappointment” and watching The Lawrence Welk Show “wonnerful, wonnerful, wonnerful”. They raised four children together. They worked on houses together. They attended every auction this side of Hoboken, New Jersey and had more salt and pepper shakers than I have hairs in my beard. And they did it together!


Though neither of them ever had much in the way of money or expensive possessions, they had love in abundance. In a society where so much value is put on possessions, and a “look at me” mentality dominates the world, I find it so refreshing that I grew up with the examples of two humble, selfless, loving, and funny people who I could look to as role models. Ivo and Ruth Wilcox made the world a better place in their own small ways and those of us who had the pleasure to know them and to be loved by them are so much the better because of it!