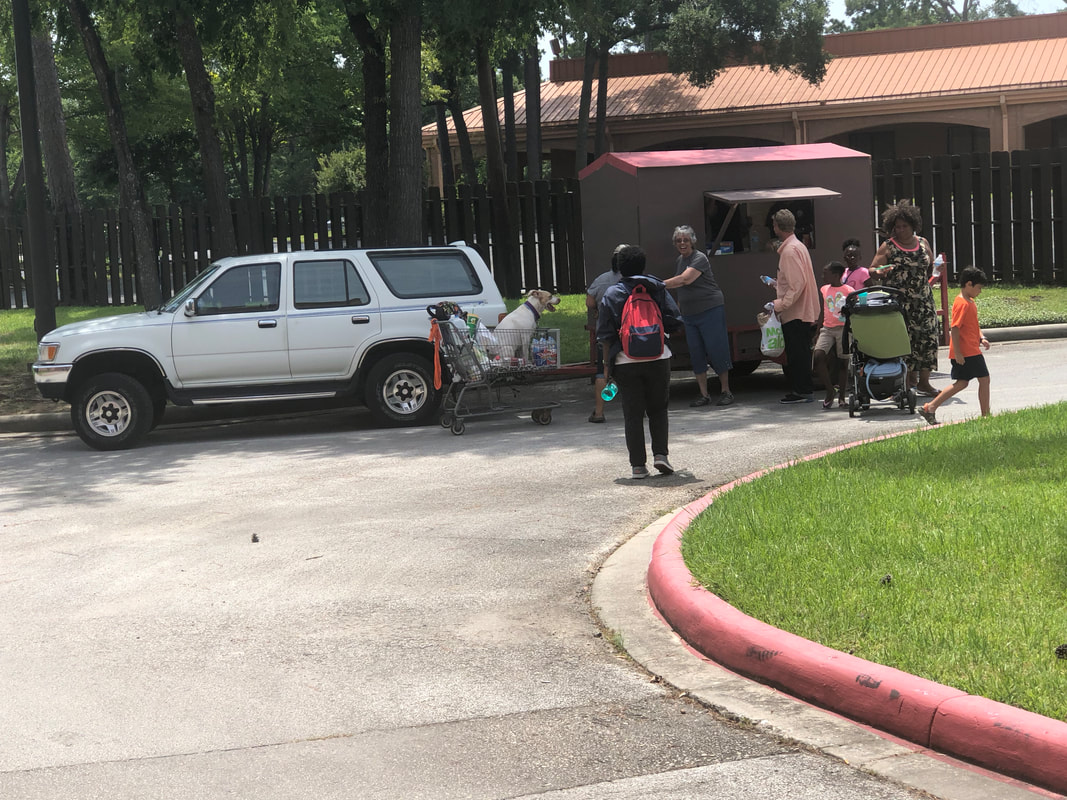 This article consists of reflections by Sally on how we got started.

Conroe is a northern neighbor of Houston. Houston mayors have become known as “unfriendly to the homeless.” It is against the law to feed the homeless, though many do anyway. It isn’t in Conroe.  Not yet anyway. There are numerous restrictions as we  learned over time  As we began we were unaware of them.

We simply put together snacks that included homemade burritos or hotdogs. We had what seemed like an endless supply of eggs from our hens that free ranged on our property. We combined them with potatoes and beans, made healthy cookies, added a banana or an orange and packed them into freezer bags. We would provide at least one healthy meal a week for the folks we found. Some told us they hadn’t eaten in days.

Lee’s Toyota 4-Runner provided sufficient room for the meals and a cooler full of ice and water bottles. Costco quickly became our go-to store. We could get 40 bottles of water for $2.99! There were also great deals on tortillas for the burritos, and a bunch of bananas only cost $1.40.

The library was our first target. We had noticed what appeared to be vagrants sitting in chairs on the second floor. They were usually sleeping, but sometimes were listening with ear pods to whatever turned their fancy. We started out there simply asking if they were hungry. We avoided the term homeless because, after all, you may live indoors and still be poor and hungry.  Though they were trying to avoid eye contact, the sound of food got their attention! We soon found ourselves feeding upwards of forty each Saturday!

Then we googled parks in Conroe and bingo! Many parks in Conroe, but generally only two were hangouts for them. But those two provided us with over thirty on an average.

We were packing for sixty and it was barely sufficient when we added the extra folks we found on the streets. Their invisibility evaporated as we became more adept at spotting them. They walk at a slower pace, and with no evident purpose or clear destination. They might be sitting on a bench or a curb, and they are usually carrying a backpack. We learned later that they had all their earthly belongings in these backpacks. Some pushed grocery carts, strollers with stuff or dogs instead of babies, and almost always avoiding eye contact. Avoiding eye contact makes you invisible it appears.

Where were these folks before we started looking for them?  They never changed. It was our awareness that did. They just blend into the environment or perhaps the population at large simply didn’t want to see them. At any rate they have become invisible people.

If you don’t admit a problem is there you don’t see the need it remedy it. You sleep better at night not acknowledging there is a need you could meet but just don’t want to. Getting Johnny to soccer practice can still be your top priority. Or worse we might be late for church!  You can only hope that the good Samaritan isn’t on the program for Sunday school.

The answer, of course, comes from the church. Not the building, the Body of Christ. Many churches have seen the need to feed the homeless when Thanksgiving or Christmas roll around. So “Come Christmas we’ll go to soup kitchen and feed the poor souls (who are still around since last Christmas). The kids will learn a lot” they said.

And they’re right! The kids do learn a lot! And so do we. We’ve learned that people are people no matter where they live. That people need people all year long! No matter what they wear, or how they get around. And that’s why I’m writing this down. I never want to forget them!